Top chairperson in the UK

As previously reported, the team from Flint High School reached the National finals in
the Rotary Youth Speaks competition. Despite a magnificent performance, they were not in the first three places, but let nothing detract from what is a tremendous achievement.
On a personal success, Erica Roberts was judged as the best Chairperson of all teams. Again, their chosen topic was Mental Health as was delivered by Kate with considerable passion. The vote of thanks was delivered by Carys. All of Flint High and Flint and Holywell Rotary are so proud of them. Also huge thanks to English teacher, Mrs Dawn Jones, who has nurtured and guided the team to their success. Also mention to their parents and family who made the long journey to Exmouth and back.

The photograph below shows the team at the final in Exmouth – from the left, Mrs Dawn Jones, Kate John, Erica Roberts and Carys Watchorn. 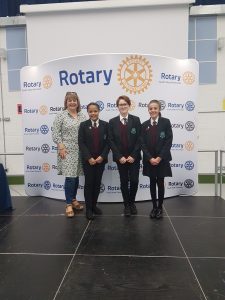