The Rotary Club of Flint and Holywell welcomed back our high achiever, Ana Blease, on Monday evening.

Ana was presented with her Rotary Young Citizen Wheelpower Sports Award at the National Rotary Conference in Nottingham on Sunday.

Much has already been written and published about Ana’s significant achievements in wheelchair basketball. This Young Citizen Award just recognises the magnificent contribution she is making to that sport, and in supporting and encouraging many other young disabled people.

There were many nominations for this award from the 1800 Rotary Clubs in Great Britain and Ireland. The fact that she has shone through is just reflected in the citation which describes her as inspirational and a positive role model.

A part of this award, she received a prize of £500.00, which she has donated to the Rhyl Raptors Wheelchair Sports Club, with whom she has been closely associated with, and where she has developed her enormous talent for wheelchair basketball. 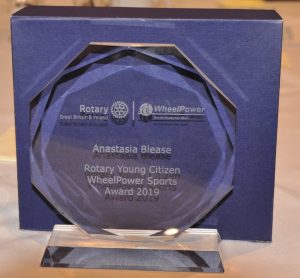 Flint and Holywell are one of 57 clubs in a Rotary District that covers all Mid and North Wales, East Cheshire and Manchester and the Wirral and Merseyside. Steve said that Ana is only the second successful Young Citizen Award in the District.

Rotarians also heard a presentation from Donna Bullivant-Evans, from Disability Sports Wales, and the Development Officer for Flintshire in Wheelchair Sports. Donna gave a superb talk about how Wheelchair Sports is becoming more available in schools and the community.

Ana will continue to amaze us all with her future achievements. For a young girl not yet 15, to be playing for a national team and coming home with the gold medal, there is every prospect that Olympic gold will be coming home to Holywell in the next 5 years. 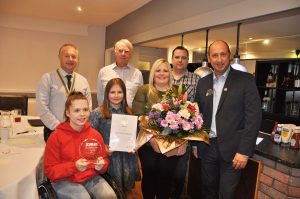