An extremely interesting powerpoint presentation from Hugh Burgess on his pilgrimage from Gorsedd to northern Spain – The way of Saint James – at the end of the evening Hugh – please write the book!! 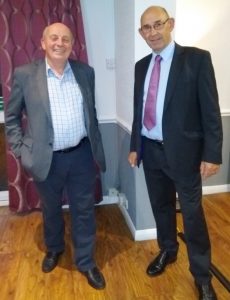 The Camino de Santiago –  known in English as the Way of Saint James among other names, is a network of pilgrims’ ways or pilgrimages leading to the shrine of the apostle Saint James the Great in the cathedral of Santiago de Compostela in Galicia in north western Spain, where tradition has it that the remains of the saint are buried. Many follow its routes as a form of spiritual path or retreat for their spiritual growth..

The Way of St. James was one of the most important Christian pilgrimages during the later Middle Ages, together with those to Rome and Jerusalem, and a pilgrimage route on which a plenary indulgence could be earned.

Legend holds that St. James‘s remains were carried by boat from Jerusalem to northern Spain, where he was buried in what is now the city of Santiago de Compostela.

The Way can take one of dozens of pilgrimage routes to Santiago de Compostela. Traditionally, as with most pilgrimages, the Way of Saint James began at one’s home and ended at the pilgrimage site. However, a few of the routes are considered main ones. During the Middle Ages, the route was highly travelled. However, the Black Death, the Protestant Reformation, and political unrest in 16th century Europe led to its decline. By the 1980s, only a few hundred pilgrims per year registered in the pilgrim’s office in Santiago. In October 1987, the route was declared the first European Cultural Route by the Council of Europe; it was also named one of UNESCO‘s World Heritage Sites. Since the 1980s the route has attracted a growing number of modern-day international pilgrims.

It has been only recently, in the 1990s that the pilgrimage to Santiago regained the popularity it had in the Middle Ages.

Since then, hundreds of thousands (over 300,000 in 2017) of Christian pilgrims and many others set out each year from their homes, or from popular starting points across Europe, to make their way to Santiago de Compostela. Most travel by foot, some by bicycle, and a few travel as some of their medieval counterparts did, on horseback or by donkey (for example, the British author and humorist Tim Moore). In addition to those undertaking a religious pilgrimage, many are hikers who walk the route for travel or sport. Also, many consider the experience a spiritual retreat from modern life.