A few weeks ago, we announced the winner of our Young Writer completion at Ysgol y Llan, Fred Phillips. Since then, a lot more has happened. Fred was one of two entries that went forward to our District, and again he was chosen as the winning entry. Given there are 57 Rotary Clubs in the District, and thus a considerable number of entries, this was a remarkable achievement. Fred then went forward to the National completion representing our District. With entries from all 13 Districts, he did not get into the top 3, but was nevertheless “highly commended” by the judges. Fred’s winning entry was all about his great grandfather, Harry James Shepherd, who fought and was killed in the First World War. Fred has spend many hours researching his great grandfathers bravery, and has been inspired by this Fred says “ I thank him, and everyone who gave their lives, for what they did to save ours. We thank the Lord that there were people like that in our world. I hope Harry’s sacrifice will help me to become a peacemaker and maybe one day I will become someone’s inspiration”.

The judges said this about Fred’s entry. “ this is an excellent piece of writing. It comes across as heartfelt, sincere and vert powerful. The author does very well to convince the reader of his emotional commitment to his ancestor”.

Fred was presented with 2 more certificates, and he is seen with his winning certificate from the District, and with Rotarian Rob holding the certificate signed by the President of Rotary for Great Britain and Ireland. 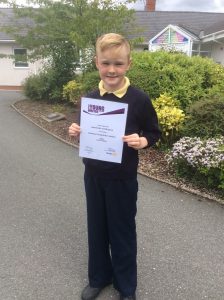 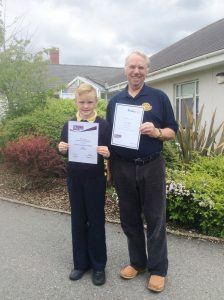 Our other winning entry in the District completion from Maddie Humphries at Ysgol Bro Carmel was “highly commended” by the judges.

Rotary extend their thanks and appreciation to Deputy Head Nathan Williams at Ysgol y Llan, and Deputy Head Nicola Jackson at Ysgol Bro Carmel for all their help and support to the many students that submitted entries. Rotary look forward to this competition appealing to more local schools next year.