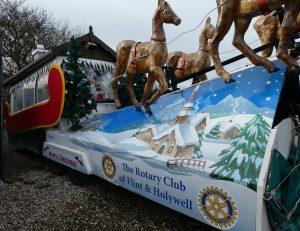 December will soon be upon us, but for members of the Rotary Club of Flint & Holywell, the hard work started way back in October when a team of members with specialist skills set to work on refurbishing Santa’s Christmas Float and its dedicated towing vehicle to ensure they were both fit and ready for Santa to commence his tour of local towns and villages.

Rotarian David Pearse described the extensive list of works which are required to ensure that children throughout this part of Flintshire have the opportunity to experience the wondrous sight of Santa’s brilliantly illuminated Float accompanied by the sound of Christmas Carols making its way past their homes or appearing in Town Centre locations.

But this operation cannot take place without a massive effort from dedicated Rotarians. David commented that the Float itself is a very heavy unit and requires a powerful 4×4 vehicle to haul it through the highways and byways of Flintshire’s towns and villages. The float itself is now quite old and needs constant and extensive works annually to ensure that it is reliable and up to modern safety standards. It also has to endure all the rigours of winter, with the inevitable driving rain snow and ice, which takes its toll, not only on the decorative appearance but also the main structure, the illuminations as well as the electrical fittings.

In this respect we are fortunate to have the owner of a specialist motor mechanics and engineering workshop as a member, along with various other members some who own joinery companies, others with design expertise together with a host of other skills, all necessary to ensure the success of this annual event. Of course all these people give up their time and expertise freely and this helps to ensure that all the money raised goes to fund the charitable donations made to local needy causes throughout the year. Indeed, the money raised from the Christmas float is the largest single money raising event in The Rotary Club’s year.

Unfortunately, the commitment required to take the float out night after night has put an increasing strain on the Float routes and some changes have become inevitable as the demand for the float to appear at Old Peoples Homes and static Town Centre locations has increased. In recent years, the Club has had to face some quite nasty attacks from certain members of the public who have been critical of the manner in which the route of the Float has been planned. Some members of the community were particularly upset that the Float did not stop outside individual houses, however The Club stated that it simply was not possible to meet the individual requirements of all local residents. The Club has however prepared a detailed Route Programme showing times and dates when Santa and his float will be touring each specified areas. The programme, which can be found in local newspapers and on social media, also indicates the location of “Santa Stops” where children can meet Santa, give him their Christmas letters and receive sweets from him. The location of these Santa Stops has been designed to ensure that all parents and their children  can plan their visit to Santa. Club spokesman David also confirmed that ALL letters sent to Santa will receive a personal reply.

With works now complete, Santa and his float are all systems go with the first outing on Thursday 21st November when he will attend the switching on of The Christmas lights at the ever popular Flint Christmas Fair & Market