Monday 27th January – The Rotary Club of Flint and Holywell had great pleasure in welcoming Lord Greg Mostyn as its principle guest to give a talk on Japan and his love of Japanese culture. Lord Mostyn explained that he first visited Japan shortly after he left University to teach English as a foreign language. He almost immediately fell in love with the Country, and since then, had revisited on many occasions,  and now tries to visit at least once every year. He explained that to understand Japan, it was essential that he learnt the language, and after six months he felt he was reasonably proficient, sufficient to undertake some limited conversation, and since then his fluency has increased considerably. This ability to converse with visiting Japanese people has been a tremendous asset, he explained, when he greets the increasing number of Japanese tourists who come to look around Mostyn Hall each year. The tourist are surprised and delighted when they meet a British aristocrat who can actually welcome them in their own language,he commented.

On an earlier visit to Mostyn Hall, Lord Mostyn showed Rotary Club members a “Japanese Garden” which had been laidout by one his ancestors who had toured Japan at the beginning of the 20th century. Lord Mostyn then took great pride in explaining how he and his staff had lovingly restored the gardens, and later showed Club members an album containing photographs taken during this earlier visit together with another album, this time containing photographs taken by himself showing many of the same views as they are today

Rotarians were particularly interested to get an insight into the the culture and characteristics of the Japanese people, which is so different from our western culture. His talk also encompassed the beautiful countryside of Japan, its remarkable transport system and in particular its food which is one of his favourites. The last time Lord Mostyn visited Japan was to support Wales at the recent Rugby World Cup and Rotarian David Pearse, an avid English rugby supporter, who had also been in Japan for the Final when proposing the vote of thanks commiserated with Greg on the failure of Wales to get past the semi finals. Lord Mostyn immediately countered this by proclaiming that England’s defeat in the Final to South Africa was one of the best days of his life! Honour being satisfied on all sides, the meeting concluded with the Club’s President, Jim Reid also adding his appreciation. 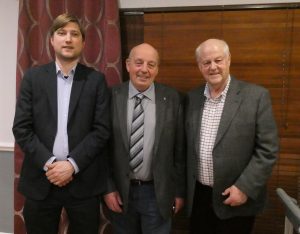