There was huge interest in this year’s ROTARY CLUB’S Young Writers Competition, from pupils attending Ysgol Treffynnon in Holywell, resulting in nearly 30 entries, and this gave the panel of judges a really hard task in finding an eventual winner. The judges were very impressed with the high literary standard and in particular, the imagination shown by any pupils in the entries. Six entries were considered worthy of a ‘Highly Commended’ award and after more detailed reading, the entry from CHLOE HUGHES was judged to be the winner.

The theme for this year’s competition was ‘Connections’, and Chloe wrote a futuristic story about a young girl called Lisa walking her dog through the ruins of Glan Clwyd Hospital.  Suddenly, the dog was floating in the air, and as Lisa went to grab her dog, there was a girl, with coloured lights shooting from her hands saying “Don’t break the connection!” Lisa ran quickly with the girl chasing her, but slipped on wet logs and everything went black.
Suddenly Lisa woke up, checked she had no injuries, then went downstairs and found her dog fast asleep. It was all a bad dream!

Rotarian Rob Board who organised the event commented that this project was designed to encourage the pupils to use their powers of imagination to the full and Chloe has clearly done a brilliant job in using her ‘connections’ theme to great effect, and is well worthy of her first prize.

The Flint and Holywell Rotary Club expressed their thanks to all the students for the hard work in writing their entries, and particularly to teacher Miss Helen Franklin for her support and encouragement. 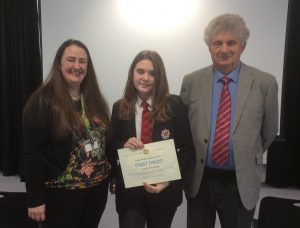