Holywell Hero of The Crimean War is not Forgotten

A gathering of distinguished local dignitaries, members of The Royal Welch Comrades Association and Holywell Citizens, including The Rector of Holywell, the Mayor and local MP met at The Memorial Gardens, Panton Place, Holywell to honour one of its forgotten heroes, Sergeant Thomas Edwin Roberts, who fell in battle storming The Great Redan, at Sevastopol, in what was one of the last battles of the Crimean War in 1856.

Sergeant Thomas’s was bought up in Holywell where his father ran The Bell Inn. He joined the Army and rose rapidly through the ranks becoming a sergeant in The Royal Welch Fusiliers (The 23rdFoot). He was unfortunately at the age of 29, killed in action trying to save the life of an injured Company Officer in a forward position during this fiercely fought battle. His bravery subsequently was recognized by his surviving colleagues who subscribed to fund a substantial stone memorial from their meager wages to their fallen comrade In those times the recently instituted Victoria Cross was only awarded to surviving soldiers and as such, no official award was ever made to Sgt Roberts.

Over the years, the forgotten memorial at St James Churchyard Holywell became more and more dilapidated, however in 2005, local resident rediscovered the memorial and decided to raise funds to restore it and relocate it to a more prominent location within the Town of Holywell to ensure that future generations would not forget the supreme sacrifice made by one of its own sons.

Local resident Tim Jones, and later, Major Robert Lake of The Royal Welch Fusiliers came to the local Flint & Holywell Rotary Club to speak about Sgt Roberts and the project to restore the memorial. Following on from this, the Club agreed to support the venture and provided funds to erect an information plaque, close to the newly restored and repositioned memorial. It was particularly poignant to have the memorial rededicated by a direct descendent of Sgt Luke O’Connor who was a friend and comrade of Sgt Roberts and who himself was injured in the battle but who survived and was later awarded the Victoria Cross.

The President of The Flint & Holywell Rotary Club, Neil Roberts attended the ceremony and stated that his Club was particularly moved by the story of Sgt Robert’s heroism and had no hesitation in providing the financial support required. At this time when we are remembering those gallant soldiers who fell 100 years ago in the Battle of Passchendaele, we should never forget those who had fallen in the service of their Country in previous times. 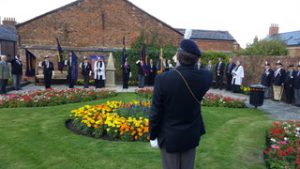