It was a great pleasure to accept an invitation from Jim who is not a stranger to S.A. to co – host a South African style BBQ (Braai) at his home in North Wales.

Jim even went so far as to have Boerewors (Farmers Sausage) made by his Butcher in Chester. Wow that is truly in the spirit of Rotary.

Jim, my Darling husband Dave and my Sister – in Law Chrissie spent some considerable time cooking, setting tables and chairs and erecting a Gazebo to hold the bar, tables etc.

We hosted over 70 people most of who were from the Rotary Club of FLINT AND HOLYWELL. We were aided by friends of Jim and other Rotarians. I would like to say a very big thank you to all concerned for the hospitality and sheer hard work that went into preparing and hosting this event.

I presented past President Neil Roberts with a certificate from our club and am (I am told) shortly to receive a flag from the club.

We managed to raise a whopping total £1250.00 which is being split between our Club for Project Dignity and the FLINT AND HOLYWELL club for a shipment of 40 boxes of educational books to schools in Uganda. 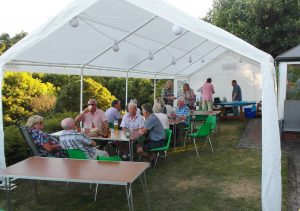 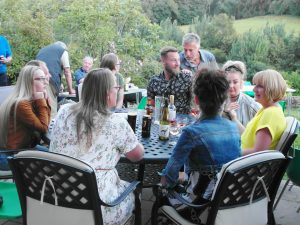 Thank you all once again for your help and for the friendship shown with so much practical help.
Rotarian Arlene Arnold
Rotary E-Club of South Africa One