The Port of Mostyn Ltd is located in the central Irish Sea where it has been a significant trading point between the U.K. and Ireland for over 400 years. With recent expansion and modernisation Mostyn has been developed to become one of Europe’s most important ports for the offshore renewable energy sector.

The Port is privately owned and operated located in North Wales in the outer estuary of the River Dee.  It is a Statutory Harbour  Authority and also the Statutory Pilotage Authority for navigation in the estuary.

As one of the oldest ports in the country, Mostyn has a long history of handling cargoes including steel, timber and woodpulp, and also bulk cargos of coal, iron ore, woodchip and sulphur for the region’s heavy industries of the time.

Animal feedstuffs and fertilizers for the agricultural sector of north Wales and the north-west and midlands of the U.K. were also handled at the Port.

Over recent years however, Mostyn has become one of the main centres in Europe for the assembly and installation of turbines; a large portion of its business is now dedicated to the sector.

The presence of our guest speaker, Jim O’Toole, as chairman of St. Kentigerns Hospice Trust, gave the Club the opportunity to present a cheque for £3230 toward hospice funds, raised through the Casino Night held in October last.

A vote of thanks was given to the speaker by Rtn. Paul Islip and Jim O’Toole responded by thanking members, in particular Paul Islip, for organising a very successful event.

In attendance to receive the cheque and to brighten the top table –  Laura Parry – Fundraising manager at St. Kentigerns. 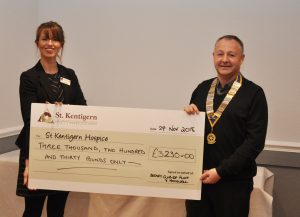 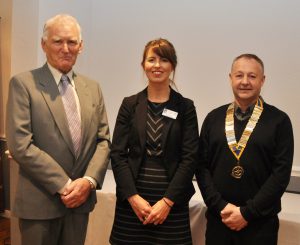