Rotary are absolutely delighted to announce that our local basketball player, Ana Blease has won a top award. Ana was nominated for the Rotary Young Citizen Wheelpower Sports Award. This award recognises and highlights the achievement and contribution as a positive role model to others by a wheelchair sports participant. This is a very prestigious award that attracted many nominations. It is sponsored by Rotary for Great Britain and Ireland, with Wheelpower – which used to be the British Wheelchair Sports body, and based at the renown Stoke Mandeville Hospital.

We have previously reported on Ana’s considerable achievements, and that our Rotary Club were very pleased to contribute £500 toward a special wheelchair for her.

Ana has been playing wheelchair basketball since she was 8 years old. She has played for the Wales national team under 15’s each year since she was 9, and has been vice captain for the past 2 years.

Recently she was selected for the GB under 24’s women’s team, currently the youngest ever selected, and a team that in the European Championship came home with the gold medal.

She is an ‘I am’ embolden ambassador for deaf and disabled women for Disability Wales.

Ana is currently training hard for selection for the forthcoming world championships in Thailand. This will be a tall task, but we all wish her well. As indeed when the selections are made for the ParaOlympics in 2020.

Ana will be presented with her award by TV presenter Ellie Cristell at the Rotary National conference in Nottingham on 12 May.

Well done Ana. Thoroughly deserved and we are all so proud of you. 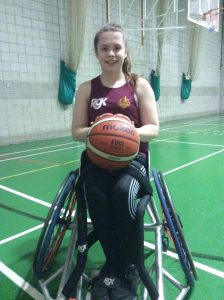