Rotarian Bob Hughes (Prestatyn Club) addressed the Club meeting on 3rd June on the failure of engineers to identify the problems in the construction of the bridge and in particular the effects of ‘funnelled’ high winds on the structure.

A very interesting talk dating back to the industrial revolution and the differences between stresses exhibited by cast and wrought iron.

Below is synopsis of the disaster: 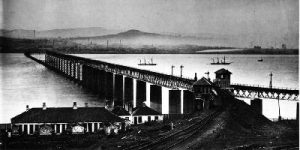 At approximately 7:15 p.m. on the stormy night of 28 December 1879, the central navigation spans of the Tay bridge collapsed into the Firth of Tay at Dundee, taking with them a train, 6 carriages and 75 souls to their fate.

At the time, a gale estimated at Beaufort force 10/11 was blowing down the Tay estuary at right angles to the bridge. The collapse of the bridge, only opened 19 months and passed safe by the Board of Trade, sent shock waves through the Victorian engineering profession and general public.

The disaster is one of the most famous bridge failures and to date it is still one of the worst structural engineering failures in the British Isles.

The first Tay rail bridge was completed in February 1878 to the design of Thomas Bouch. Bouch was responsible for the design, construction and maintenance of the bridge. Most of his bridges were lattice girders supported on slender cast iron columns braced with wrought iron struts and ties, such as the Belah Viaduct in the photograph to the right. The building of the Tay bridge culminated in him being knighted.

The Tay bridge was nearly two miles long, consisting of 85 spans and at the time was the longest bridge in the world. The spans carried a single rail track; 72 of these were supported on spanning girders below the level of the track; the remaining 13 navigation spans were spanning girders above the level of the track (i.e. the train runs through a tunnel of girders).

These “high girders”, as they were known, were 27 ft high with an 88 ft clearance above the high water mark. It was these spans which fell. Most of the girders below track level, all of which remained standing, were transferred to the present Tay rail bridge. At the time of the collapse Bouch was working on the design of the proposed Forth Bridge. In consequence, the design of the bridge was transferred to Benjamin Baker and Sir John Fowler.

A Court of Inquiry was set up to try and ascertain the reason for the collapse of the bridge. The Court of Inquiry report concluded that, “The fall of the bridge was occasioned by the insufficiency of the cross bracing and its fastenings to sustain the force of the gale.” The Court of Inquiry indicated that if the piers, and in particular the wind bracing, had been properly constructed and maintained, the bridge could have withstood the storm that night, albeit with a low factor of safety – 4 to 5 was the norm at the time.

Sir Thomas Bouch was held chiefly to blame for the collapse in not making adequate allowance for wind loading. He used a wind pressure of 10 lbsf/sq ft for the design of the Tay bridge. It is interesting to note that when working on the design of a proposed Forth bridge (1866) he used 30lbsf/sq ft. To this day, however, there is still speculation as to the fundamental cause and as to whether or not the designer, Thomas Bouch, was to blame

Apart from the results of the original Court of Inquiry, various theories have been proposed to explain the collapse. The picture shows the present Tay Rail bridge alongside the pier remains of Bouch’s bridge. It is a very emotive site and provides a grim reminder of the disaster. The wrought iron girders which remained standing after the disaster were transferred onto the present bridge where they are still in use today. 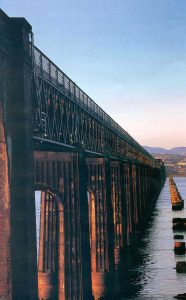