President Jim extended a warm welcome to David Shiel – Manager of the Clwydian Range Area of Outstanding Natural Beauty – and invited David to address the Club on the history of the Jubilee Tower at the summit of Moel Famau – at 554 metres the foundation stone was laid on the 25th October 1810 as a commemoration of the 50th anniversary of the reign of George the 3rd.

At an estimated cost of £3235  the project was slow in construction – raising £328 from Denbighshire and £801 from Flintshire  – ‘tight’ those Denbigh residents!!!

During the late 1800’s the tower declined due in the main due to the poor quality of the building materials and in late 1862 the obelisk collapsed during a fierce gale.

Projects in 1970 and currently involve reconstruction of the lower bastions of the tower – again can only be completed through public support and donations. 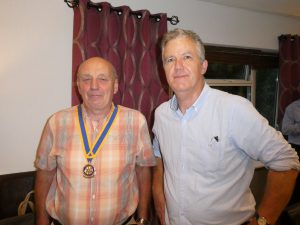