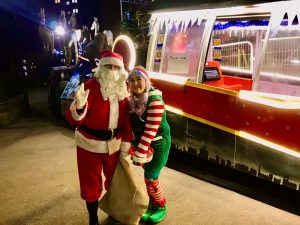 Santa, ably assisted by one of his Elves, made his first appearance of the Christmas Season in his newly refurbished sleigh at the increasingly popular Flint Christmas Fair. This event has grown considerably in popularity in recent years and a packed Church Street was treated to a host of Christmas Stalls, side shows and this year, some extremely frightening “Fairground” rides. The steps leading up to the ancient and recently restored Parish Church of St Mary’s provided the setting for choirs singing Christmas Carols, complimenting the Christmas music coming from Santa’s own sleigh.

Santa, as ever, was ably supported by not his elf, but many members of the Flint & Holywell Rotary Club who ensured that all the children who queued patiently to meet Santa were able to meet him and give him their letters. In return, Santa gave each of the children a lolly and promised them a reply to their letters which he would arrange via the local Rotary Club.

Rotary spokesman, David Pearse who worked in Church Street Flint for over 35 years commented that he was delighted to see how popular the event had become, and also how wonderful it was to see so many new shops, and businesses coming back into the Town. The good people of Flint, as ever, dug deep into their pockets to ensure that funds would be available to help the Rotary Club to assist with the many requests for help that are received throughout the year, and the Club hoped that this generosity would be repeated throughout the towns and villages of Flintshire when the Float passes by.

The highlight of the evening was a spectacular firework display, with Flint’s stunning Edwardian Castle providing the backdrop, followed by the switching on of The Christmas Lights.