COURTESY OF THE EVENING LEADER: 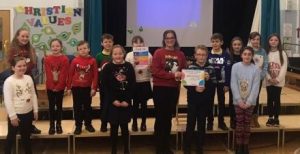 A GROUP of primary school pupils from Whitford have been busy raising money for Hope House Hospice.

The children at Ysgol y Llan, near Holywell, who call themselves The Rotakids, have the specific role of generating ideas to help raise money for those less fortunate then themselves, led by senior teacher Rhian Roberts.

Following this, Hope House Hospice was suggested as a worthy charity.

Hope House were contacted and Nicola Jackson, a representative from the hospice, came to school and led an assembly which informed pupils and staff about all of the work that the hospice does. The assembly included information about the hospice using special pools to provide children with muscle therapy, pools with special access to help wheelchair users, as well as the use of music therapy to help users interact with the environment around them.

The Rotakids organised a special ‘Sparkle and Shine’ glitter event, where the children paid to have eco friendly hair glitter and glitter tattoos, as well as toast and milkshakes for snack.

This was followed by a coffee afternoon for parents and grandparents, and raffles with various luxury hampers as prizes. The school collected bags with donations of clothes and toys. It was also agreed any money raised from other recent fundraising events would be added to the Hope House fundraising total.

Nathan Williams, deputy head teacher, said: “The events were a great success. In total Ysgol y Llan raised over £800, including the value of sales from our donated bags of clothes and toys. This is a fantastic achievement for our small school and we are very proud of our children.”